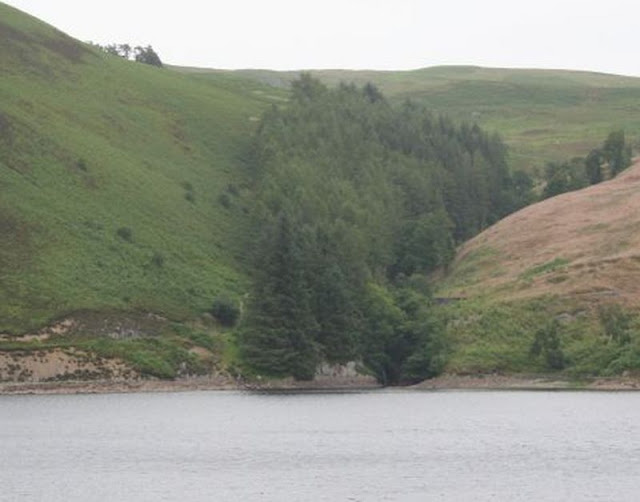 Nothing remarkable looking about it just a tree filled valley with a small stream running through but it had a big part to play in the history of WW2.
The Nant Y Gro fed into the river Elan and was dammed up to form a reservoir to give a water supply to the Navvy Village that sprung up near by when the Caban Coch dam was built. The water supply also filled tanks which were used for the steam cranes, stone cutters and other steam driven plant which was used on the dam. Once the Caban Coch dam was finished the old Nant Y Gro dam was left and the Temporary Navvy Village had become a permanent stone village at Elan and had it's own water supply.
It more of less became forgotten untill the the government requested the use of a 35ft high dam for secret experiments (can you see where we are going).

This was what the dam looked like in 1942 though in this photo it is slightly damaged after one of the experiments.
The reason for the experiment were to find out how breach the Rurh Valley dams in Germany, the Nant Y Gro was going to be blown up. After a few tries a various depths and distance they finally breached the dam.

From that the Bouncing Bomb that Barns Wallis designed was derived  and the Dam Busters name was born. The rest is history as the raid was successful and the Rurh Valley dams breached though with some loss to the planes involved.
When I found out about this place and where it was situated I'm afraid there was no stopping me, I had to visit the dam.
The opportunity came one day when I was staying at Fforest Fields campsite and went to the Elan Valley for a visit 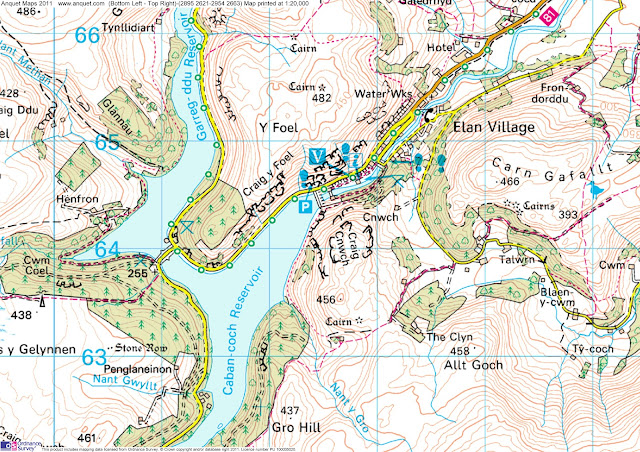 This is a map of the Elan Valley today, the Nant Y Gro is and the bottom, as you can see it is not an easy place to get to now let alone what it was like during the war which was one of the reasons for it's use, the remoteness. 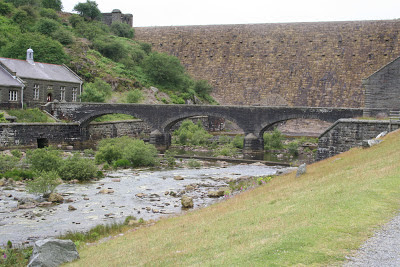 The first place you need to go is the top of this dam, take the footpath across the bridge here then climb the steps. 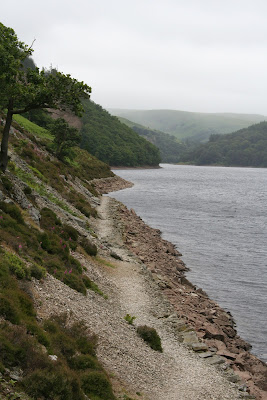 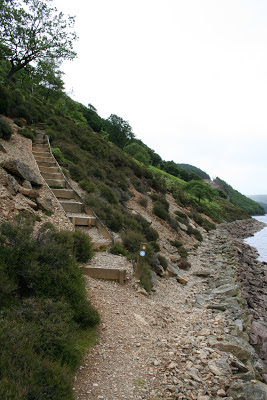 Next you will be following along the side of the reservoir on paths like this and up the steps. 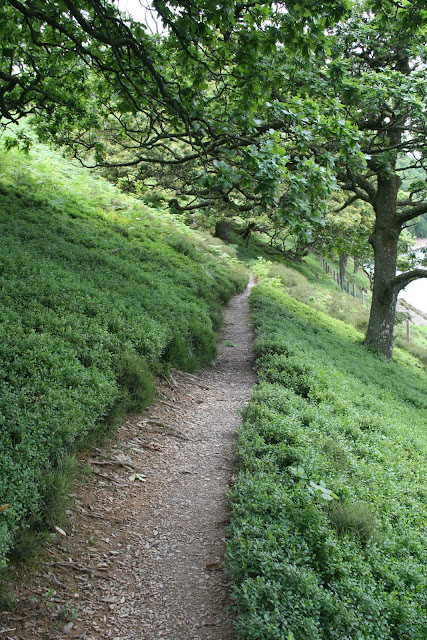 The walk took longer than I thought it would due to the terrain you have to walk across but it was worth the effort. 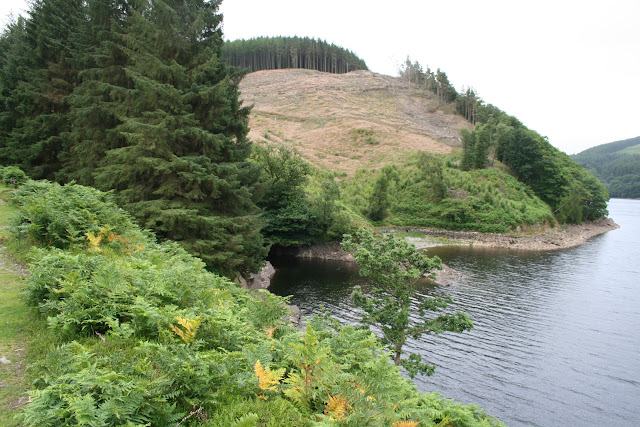 you will eventually come to the mouth of the Nat Y Gro.

This is the approach to the dam, you can see one of the water tanks ahead, go to the right for a view of the remains of the dam. 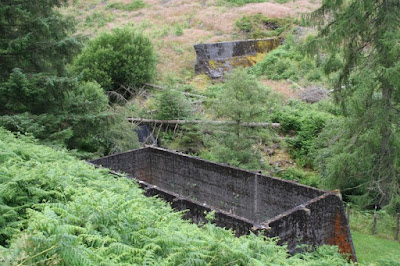 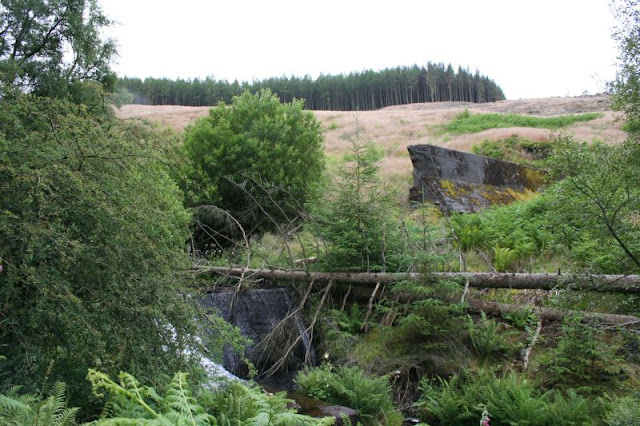 The remains of the dam today 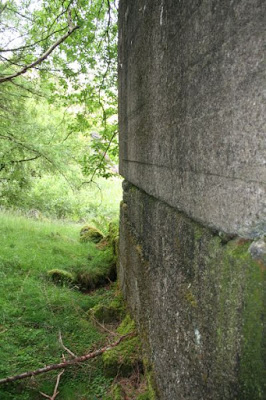 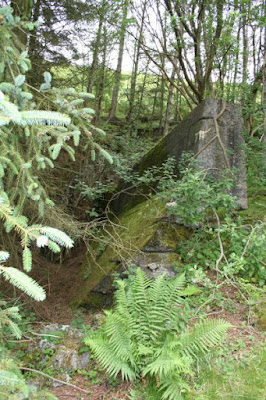 One side of the dam and from behind the wall 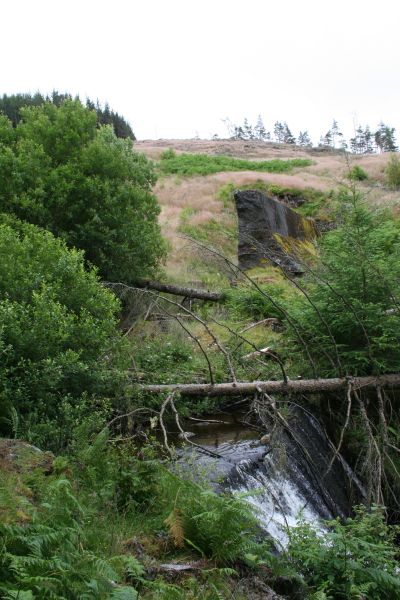 View to the other side of the dam and below one of the water tanks.
I had intended to go back but as yet have not managed to but one of these days I will as I would like to have a better look round and get some more photo's. If you go to the link Elan Valley it gives you a better history about the place and if you have time visit the church marked on the map near where it says 255. At the back are some photos taken when they built the dam, the church was built around that time as the other is at the bottom of the reservoir.
One last photo, about a year later I was at Brooklands Museum and came across this. 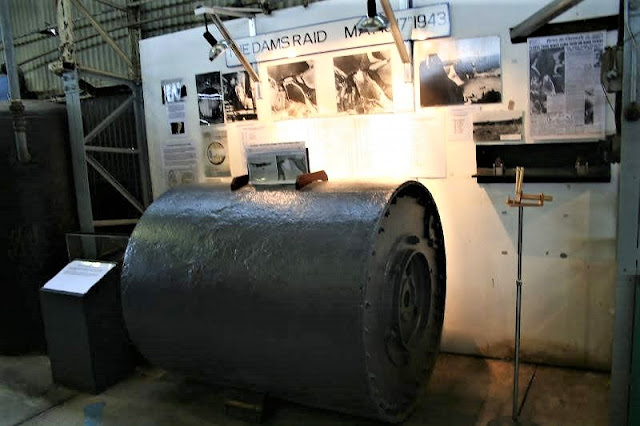 The bouncing Bomb. With out the Dam at the Nant Y Gro it would never have been developed and possibly the war would have gone on that bit longer, so the little dam in Wales had played it's part history of the war but and now lay's almost forgotten but not by me. 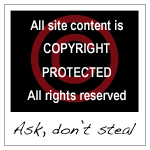